Entrance music is all so important to a wrestler. It needs to grab the crowd, establish their character and hype the audience for the match that’s to come. There have been many, many amazing wrestling themes in the past, and that tradition carries on even today.

This topic may have been our toughest to decide yet. So of course, we brought back ‘Steel Cage Royalty’ – ‘A-Bomb’ Adam Hess, to help us choose our Top 3 all-time favourite entrance themes.

Old school listeners of the Steel Cage in particular are in for a treat this time, so throw out your flip flops and grab your thongs, it’s ‘time’ for another edition of Aussie Top 3.

Who is The Shockmaster? 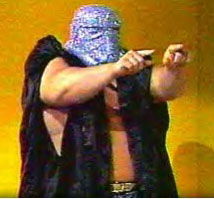 The year was 1993. Bret “Hitman” Hart was on the verge of his first WWF World Heavyweight Championship as Sting battled the likes of Big Van Vader in WCW.

Professional wrestling sought to find its identity after the Hulk Hogan era had slowed down and popular interest waned. Both brands inevitably decided that they needed to broaden their demographics, and there was only one way to do that: gimmicks.

The WWF saw guys in Royal Canadian Mounty uniforms (The Quebecers), a garbage man (Duke “The Dumpster” Droese), a man poisoned by nuclear fallout (Adam Bomb), and even a plumber (T.L. Hopper). There will be more on those guys at a later date, I assure you.

WCW was really slacking, and needed to find an answer to such brilliant ideas. Fall Brawl was fast approaching, and their face team of Dustin Rhodes, Sting, and the British Bulldog needed another man to face the ominous heel team of Vader, Sting, and Harlem Heat.

They found their answer just weeks before the event, and made the decision to debut their mystery partner on a live segment called “Flair for the Gold”. Flair, Sting, and the Bulldog seemed rather excited to introduce their partner, as Sting said, “All I have to say is… our partner is going to shock the world because he is none other than… The Shockmaster!”