By Darrell Johnson on February 11, 2009 in Commentary 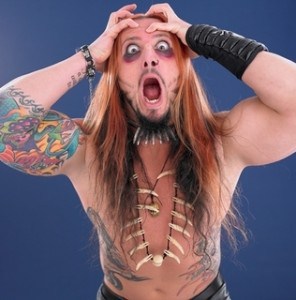 I can’t be the only one wondering — where has Kizarny gone? Has he gone the way of the Shockmaster and the Gooker? Was he the one-off horrible gimmick we all suspected he would be? Say it ain’t so, Vince!

For those who weren’t watching any wrestling over the past (seemingly) seventy-eight months, the WWE overhyped a new character who had the moniker Kizarny. You see, he was a carny and for some reason he spoke like Snoop Dogg at his most herbalicious. Also, he had eye makeup and a long, greasy goatee. I’m guessing Vince saw the dude, decided he reminded him of the tilt-a-whirl operator in a carnival he attended in 1952, and ran with it. At least, that’s the story in my head.

In actuality, Kizarny is a fellow named Nick Cvjetkovich (don’t ask me how to pronounce that). He wrestled in the Canadian independent circuit and on TNA as Nick Sinn, Original Sinn, or just Sinn (ahem, SiNN). According to Wikipedia (the source of information on public figures no one should care about), he’s a protege of Jake “the Snake” Roberts and is childhood friends with Edge and Christian. That just leads me to one question: if he’s connected with Jake the Snake, and is buds with Edge and Christian, why did they give him such a lousy gimmick?

I mean, really — a carny? As a face? Is there a wrestling fan on Earth who would identify with a strange-talking carny character? Most people I know have had either zero or decidedly negative experiences with the guy who takes tickets at the Ferris wheel. Nobody would think, “man, I hope that toothless, unshaven, unshowered jackass pounding stakes into the ground has what it takes to beat Shelton Benjamin.”

When his debut finally came, I was filled with mock excitement. I called fellow TSC founder J-sizzle and made sure he’d be watching. Nobody could miss the level of suck that was to come. It turned out, he’s not a terrible wrestler and he has potentially okay mic skills, if not for his intentional speech impediment. The remarkable thing about his match against the still-losing MVP was that the crowd didn’t care at all. It’s rare when you can sense crowd apathy through a television, but it was apparent. The crowd didn’t hate him for his ridiculous promos, and they didn’t mockingly cheer (as I probably would have done). They sat on their hands and waited for the next match. Kind of a disappointment after seventy-eight months of carnival-themed video packages.

So now it’s been over a month and we’ve heard not word one from Kizarny. Well, okay — he was the first man eliminated in a pointless Battle Royal a couple weeks back. Beyond that, nothing. The rumblings say that it’s time for a rebirth, since nobody will want to stomach another round of “Smizzackdown is gizzoing to gizzet strizzange”. I hope it comes soon. Any friend of Edge and Christian is a friend of mine, so here’s hoping Vince gives him something he can work with.