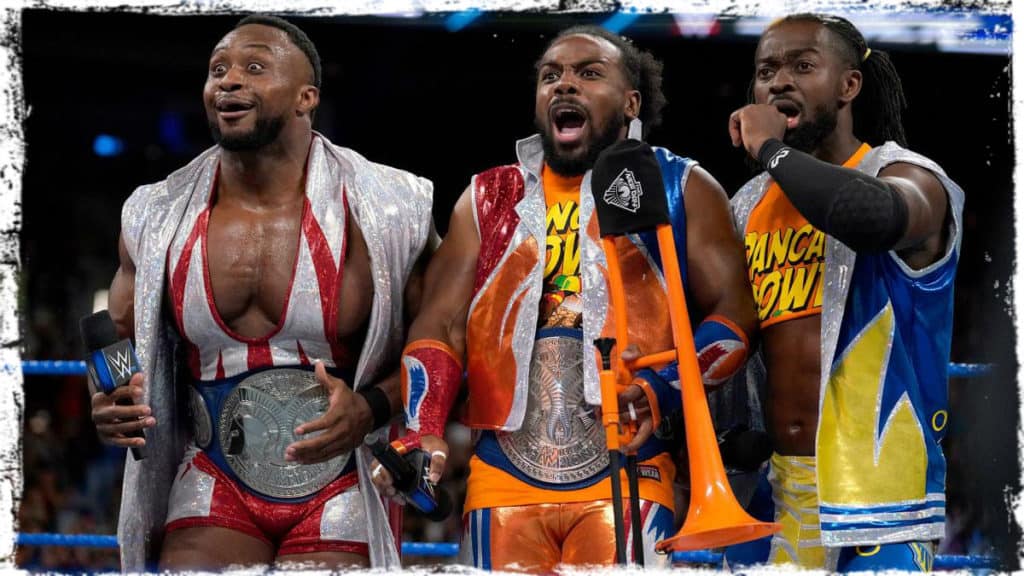 HELLO AND WELCOME… to this week’s episode of The Steel Cage Podcast. I’m trying something different this week, as Jared is trying to get work done ahead of my bachelor party and Derek’s MacBook is currently comatose (send your thoughts and prayers his way, that it may yet be revived…)

I thought we had more time together. pic.twitter.com/hSC4Gz7Kiy

Yes, this is the founder and proprietor of The Steel Cage, Joshua Schlag (@thesteelcage / @schlizzag) – and this is my take on ‘This Week in Pro Wrestling’!

This email comes to us from Chaz, from England. Chaz writes:

First of all, I thought I’d get this email in now because by the sounds of it Josh won’t be alive to put a podcast together after the bachelor party!

Following on from your conversation last week about who could feud with Ronda or act as a hired hand for Stephanie, I was struggling like you guys with who they could bring back or bring in… and then it hit me. Why not bring in Jazzy Gabert as Stephanie’s henchwoman? She got a massive reaction with the fans in last year’s Mae Young Classic, she’s crazy intimidating, she’s got a legit MMA background much like Ronda and what would could be more of a heel move on Steph’s part to bring in the “Alpha Female” to squash the women’s evolution that she herself likes to take so much credit for. I believe they were hesitant to sign her up last year because of her neck but she’s had surgery and is fully cleared now and wrestling in Progress.

Damn. Even rolling solo this week, someone manages to mention my impending death this weekend in Austin, Texas. Thanks a lot.

As for Jazzy, I LOVE the idea. I think it’s quite the stretch for WWE to go outside of the NXT + Performance Center system, but it could work pretty well for exactly the reasons you laid out. Frankly, the upcoming Evolution PPV could really use some intriguing big-time storylines, and something along those lines could be just the ticket.

Speaking of which, I was happy to see Trish show up on TV this week. It’s still rather half-assed to me that they paired her up with Alexa BEFORE initiating any of the story building, but better late than never? I just hope that the remaining matches aren’t pre-announced in such a way.

While I’m on the topic of women in the WWE, I was quite vocal last week in regards to my disgust towards WWE for the way they handled the Becky Lynch situation. Trying to push her as a heel was BEYOND insulting, and I’m glad that they’ve backtracked. Some may still be complaining that they aren’t going all in by making Charlotte the true heel in the situation, but I think it’s justified to keep her face(ish) for the moment. Shades of gray have their time and place, and with public appearances and all that jazz, I’m sure they have their reasons to not pull the trigger on Charlotte playing the role she’s meant to play. Meanwhile, Becky Balboa 3:16 lives on, and I’d STILL buy one of those shirts if they put one out.

While we’re on the topic of SmackDown, I gotta once again hand it to Paige for being the most effective GM we’ve had in some time. Shane + Daniel Bryan did a decent job in their tenure, but let themselves get caught up in the drama far too often. Paige just plain gets shit done. Tag Team Champions lose one of their guys due to injury? No problem. Give The New Day another opportunity, then set up a series of matches to determine who’s next in line. This time, we get to see two triple threat tag matches: The Bar vs The Club vs The Colons this week and The Usos vs Rusev Day vs SAnitY next week. That gives us one more week to have the winners of those matches face each other just in time to set the championship match for Hell in a Cell. Boom. I wouldn’t mind The Bar vs The Usos in the final, but I also wouldn’t mind The New Day vs SAnitY getting some proper build and attention. SAnitY has been a bust so far, but it’s based solely on the booking. Book them like an unhinged version of the original SHIELD and we’re in business.

Over on RAW, The B-Team vs The Revival has been picking up in the past few weeks. They were relegated to the SummerSlam pre-show, but have told a decent story in the weeks since that show. The Revival came up short in Brooklyn, but racked up singles victories over The B-Team, then made a statement this week in tag action. They seem poised to claim the throne at the top of the red brand’s tag division, and it can’t come soon enough as far as I’m concerned. The Deleters of Worlds became stale a lot faster than I would’ve thought, and they brought the titles down with them. It’s time to instill some championship caliber talent in The B-Team’s place, as RAW should be able to create some interesting rivalries with tag teams that they’re otherwise wasting (AoP, Titus Worldwide, for starters… let alone The SHIELD and Dolph + Drew).

Perhaps the most intriguing thing to happen this week on RAW was the departure of Kevin Owens. He answered the call for an Intercontinental Championship open challenge, and tore the house down with Seth Rollins. But he came up short, and simply stated, “I quit.” Two days later, old school Kevin Steen shirts popped back up on Pro Wrestling Tees:

.@FightOwensFight on #RAW: "I quit"

What could this mean for Kevin Owens? How does he get his groove back? I fully anticipate big things for the future, as this seems like a drastic move leading up to a surprise. Could Braun get screwed out of his cash-in with Baron Corbin handling things the way he does? 🤔

Here’s what one of our listeners tweeted at us the other day:

i had a dream:

1. KO appears in the crowd at ALL IN

3. KO cashes in and wins the Universal Title after Braun/Reigns match

Things that make you go hmmm…

All right, I’d like to keep this short and sweet, so let’s wrap things up lightning round style:

Winner of the week: Kevin Owens, for putting on a hell of a match and making me intrigued AF.

Buy a shirt at thesteelcageshop.com using promo code ALLIN from now through noon on September 3 to get 20% off our shirts (The King of Soft Style) as well as anything else on the site – including the “Zoo Enthusiast” shirt on Kevin Steen’s store!