By Joshua Schlag on May 9, 2016 in Uncategorized

I can’t tell you how happy I was to hear Stone Cold Steve Austin extolling the virtues of craft beer, IPAs in particular, on his podcast over the past year or so. After seeing him crack Miller Lites and Budweisers for so many years on WWE television, it was refreshing to hear that he had a matured palate for beer. Not that there’s anything wrong with the occasional Miller Lite or Budweiser… Okay, maybe that’s more of a CYA in case my dad or girlfriend come across this post…

That said, I was also quite pleased to hear that Steve was partnering with El Segundo Brewing Company to put out his own IPA. If you’ve been following us for some time, you may remember that ESBC was one of our pregaming destinations of choice for PWG back in 2014:

Anyway, I was beyond excited last Christmas when my brother picked up a couple bottles of this stuff for me as a gift, and I was just as bummed out when those bottles were almost as quickly as a Mick Foley title run. Thankfully, my brother is so thoughtful that he picked up yet more to replenish my supply, and I figured I’d report on it for those of you who haven’t yet gotten your hands on a bottle (or can) of the good stuff!

Full disclaimer: I’ve never written a beer review before, so I’ll leave the technical details to the folks over on Beer Advocate.

I guess I’ll start with the ‘official’ description on the bottle:

Before I jump right in, a little about my beer tastes: I love craft beer, but I especially love a good balanced IPA. The first craft beer of any sort I can recall drinking was Sierra Nevada Pale Ale. It was hoppier than anything I ever had, and I loved it for that. To this day, it remains a solid option, though I rarely keep it in my fridge anymore. Not long after that, I started down the road of promiscuity that is well known amongst craft beer enthusiasts. There’s this drive to always try something new. With that, I found some super hop heavy IPAs that I loved initially, but also ultimately wrecked my palate for hops. I took a break for a few years, until I circled back around to Lagunitas IPA; which, along with Ballast Point’s Sculpin, find regular places in my fridge these days… I like other styles too – saisons are probably my next choice, followed by stouts and porters. 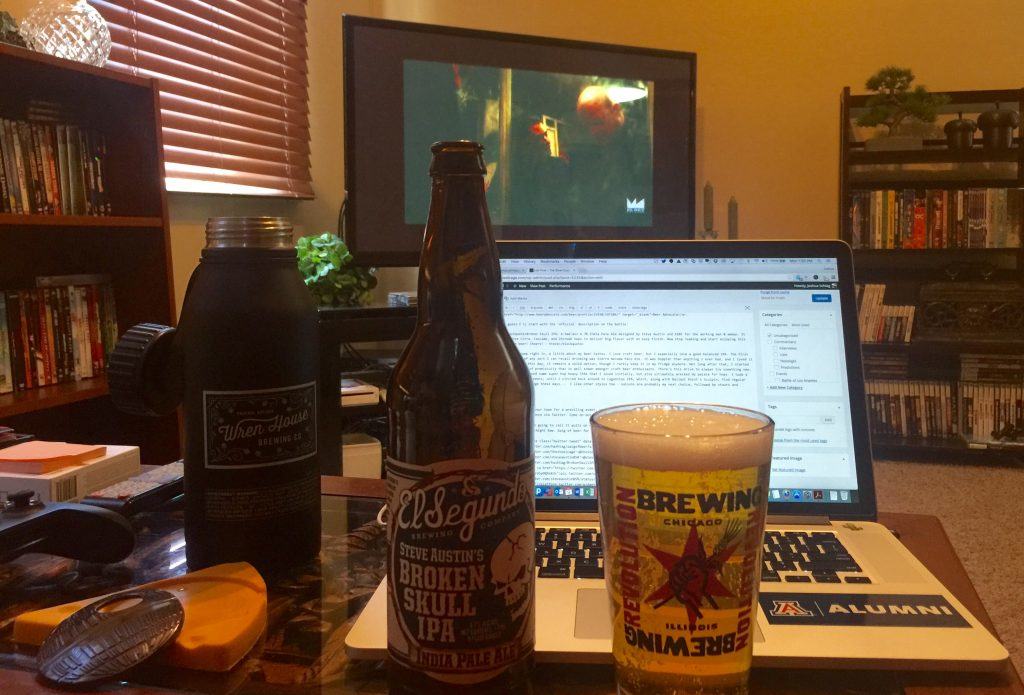 I chose a pint glass from Revolution Brewing Company, as it was the spot I hit up before catching Chikara’s Quantum of Solace in Chicago, also back in 2014. This beer pours nicely with a nice hoppy / floral / citrus aroma. It’s a bit lighter in color than some other IPAs I frequent. 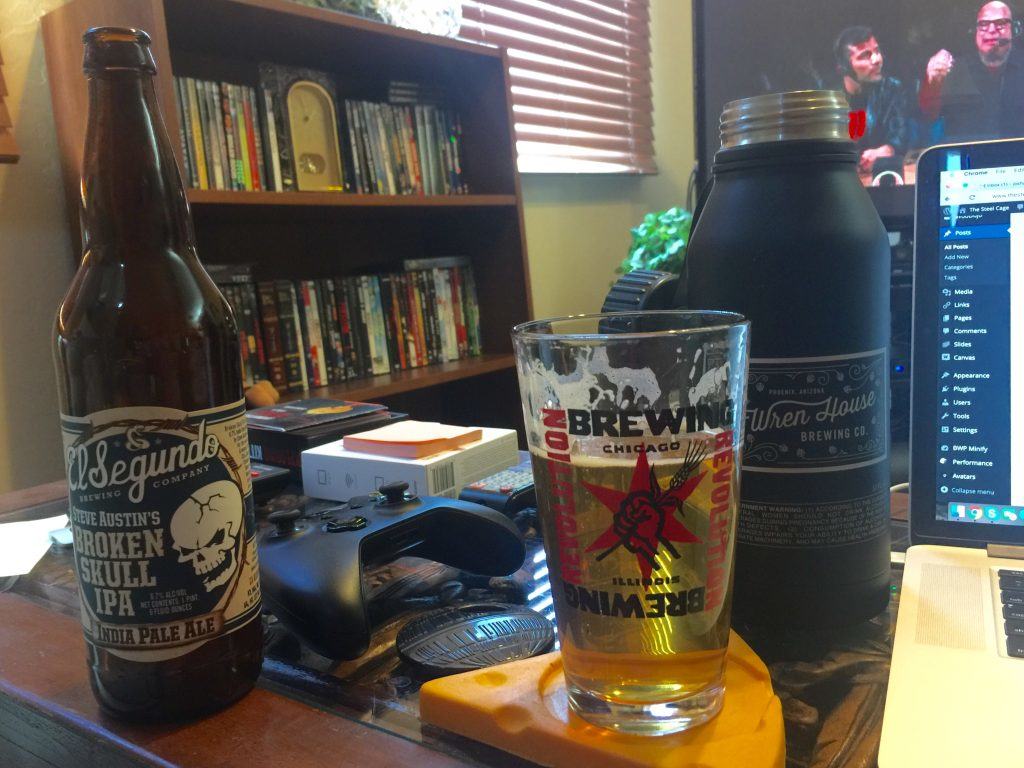 After a few sips and a healthy swig of this beer, I’m reminded about why this didn’t last long the first time around. It’s smooth and well balanced. Just enough of the hops to satisfy my craving, but not anywhere near harsh. Alternatively to a regular IPA like this, session IPAs tend to sacrifice hop flavor as they shoot for a lower ABV. At 6.7%, this is just about the right mix of hoppiness and booziness for me to enjoy more than a couple (if I had that much on hand). 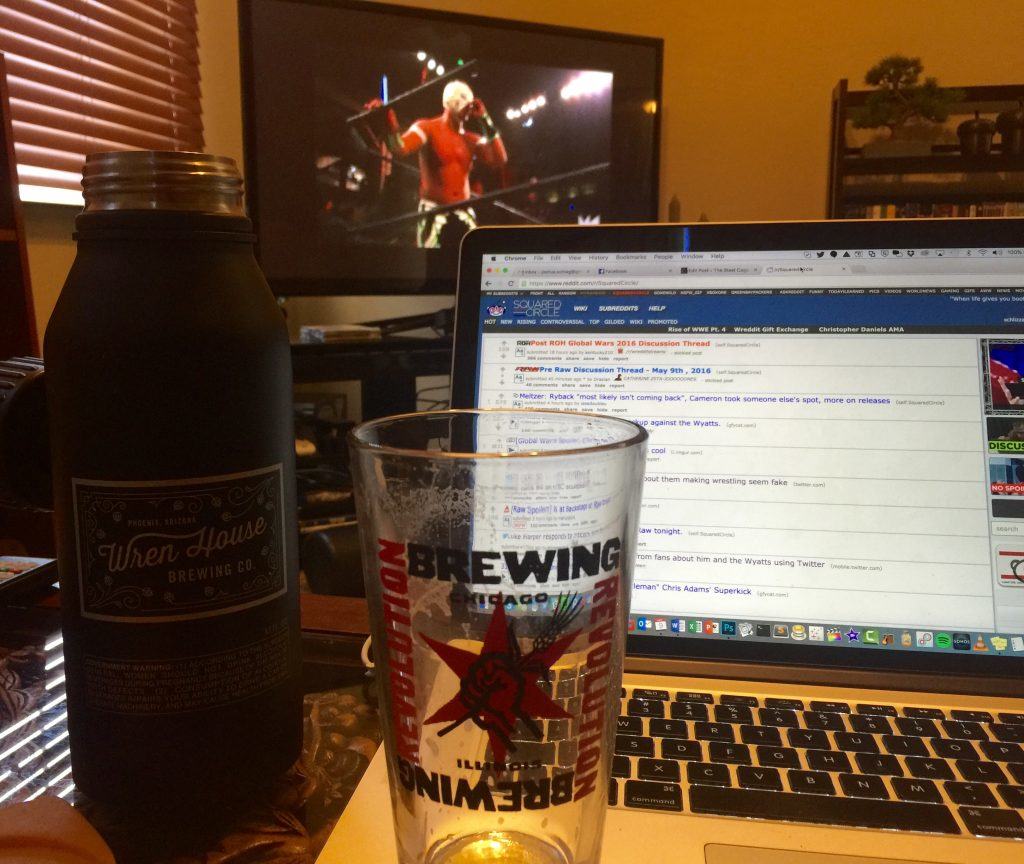 …and it’s gone. I do have a few more bottles on hand, thanks to my brother, but I’m going to be nice and hang onto them for the next time my podcast compadres swing by the Marty Jannetty Memorial Podcast Studio.

If we’re ever in your town for a wrestling event, you can no doubt find us at a local brewery before the show. We’ll try and announce our presence via Twitter. Come on out and say hello!

That all said, I’m going to call it quits on writing for the day, and with a little bit of a buzz – finish off an episode of Lucha Underground to get ready to catch the latest episode of Monday Night Raw. Swig of beer for the working man!

Want to open up your own bottle of hop forward whoop ass? You can pick up some of this beer through Inside the Cellar’s website: